The Meeting is Free & Open to the Public

The history, development, military involvement, and other aspects of remote Perception will be addressed.

Focus may be relevant to “A Comparison of Remote Viewing and Remote Dowsing” and “Telepathy and Recorded and Correlated on an EEG.”

Reports are that money has been made using Remote Dowsing and Associated Remote Viewing to determine winning selections. This will be an overview of the techniques used.

This project initiated by INACS founder Jim King, will use QEEG to brain scan subjects before, during, and after dowsing training, to determine any differences in mental activity.

Using Remote Perceptions in various applications – can differences in brain activity be determined  with EEG, fMRI, and other brain scan methods to determine whether there is a correlation, and what part of the brain is active. Practical applications will be listed.

Remote perception is one segment of a spectrum of ESP related anomalies, from telepathy to telekinesis. The band width includes such diverse phenomena as near death experiences NDE, and out of body travels OBE. Remote sensing protocols and structured training have developed to formalize the field, as opposed to other paranormal happenings such as psychic abilities, which are often ad hoc and not brought forth at will.

These presentations of Remote Perception assumes the validity of the discipline, and hence other paranormal phenomena. So for believers of the gospel, or skeptics in part, this excursion in paraperception should be of interest. 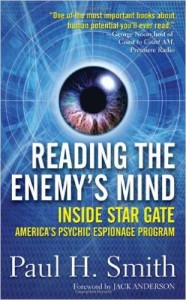 When word got out in 1995 that the U.S. Defense Department and CIA had funded efforts to read people’s minds, the news understandably excited all sorts of derision and conspiracy theories. Who would imagine that the story behind the efforts is actually a fascinating tale about the possibilities of human potential? Paul H. Smith tells the story of the U.S. “psychic spying” program in his book Reading the Enemy’s Mind. Smith doesn’t come across as some flaky new-ager. He was a young U.S. Army intelligence officer and Arab linguist who had no previous interest in extra-sensory perception when he was recruited into the program code-named “Star Gate” in 1983. Over the next seven years, he became one of the army’s premier “remote viewers” and the primary author of its training manual on the subject. He also served as a tactical intelligence officer in the 101st Airborne Division in Operation Desert Storm/Shield and got a Master’s degree from the Defense Intelligence College.

In Reading the Enemy’s Mind, Smith reveals that the military and intelligence communities performed hundreds of experiments and operational intelligence assignments using “remote viewing,” the government’s term for ESP. The program’s first big success came in 1979 when a viewer found a downed Soviet bomber in Africa after other intelligence operatives had failed–a coup praised by President Jimmy Carter. The psychics received target assignments from virtually every U.S. national-security agency, and Smith says they produced numerous positive results. Smith’s biggest revelation, however, is that the government research found that almost all people–not merely a gifted few–seem to have the potential of developing ESP skills, with enough practice and a few tips from a pro like Smith. Many readers will no doubt find it hard to know what to make of Reading the Enemy’s Mind and whether to believe any of it, but Smith writes with both color and a measured tone that together produce a captivating yarn even for the non-believers out there.  –Alex Roslin —